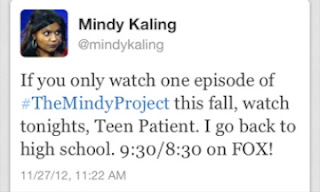 After Mindy's tweet, I made it a point to blog about The Mindy Project tonight.  It is taking time away from The Passage by Justin Cronin. {I decided to participate in "The Double Down Book Club" because of Grantland's Chris Ryan and Andy Greenwald podcast from last week, and I am now reading a 900 page book.  I will forgive them since they are from Philadelphia, and the book is good.  (Is everyone at Grantland from Philadelphia?? Even the reviewer of Silver Linings Playbook is from Philadelphia.)}

I digress back to the task at hand, The Mindy Project. Tonight's cold open was funny, I worry often about harming an intern, poor guy took a hard hit. Like every great romantic comedy, the main female character is on her journey to find love.  It is obvious Mindy hasn't found it with her current boyfriend, otherwise the relationship would be able to withstand the grueling questions of a fifteen year old.  This faulty relationship doesn't mean the show isn't without its funny moments, like Danny trying to handle an HR situation. Or Mindy visiting a high school on multiple occasions to dispense wisdom or condoms.  I have never felt older watching Mindy on the bean bag trying to have a conversation.  I would probably be doing all of those things.  I also wouldn't try to sit on a bean bag in a pencil skirt. I loved all the green of her outfit though.

I like Mindy Kaling enough to keep watching the show for its bits of comedy.  I really hope that it is appealing to a wider audience because I think Mindy is smart enough to continue to write good episode and truly hit a stride in the second season.  Once the characters are established, Mindy can play to her strengths of writing for female characters and develop a more "will they, won't they" storyline for Mindy and Danny (Dr. Castellano, almost as fun to say as Jordan Catalano).
Posted by Heather at 7:20 AM

Email ThisBlogThis!Share to TwitterShare to FacebookShare to Pinterest
Labels: The Mindy Project

I love the Jordan Catalano reference! However, much bigger crushes to be had on Dr. Castellano. You have to love scared, damaged men who are deep down inside romantics. Do they exist outside of television land?